What a Dumb Idea

Remember last week when I talked about finding Reginald and all my extra copies of the printed version of my first ten blog posts? Well, I had a dumb idea.

I decided to turn those extra copies into a freaking BOOK! Yep. I put them all together, made a cover page and a dedication page. I also did original art for all ten columns. A lot of the art is collage, but there’s also some pieces done with stickers, markers, and one even has paint. It’s really professional looking. 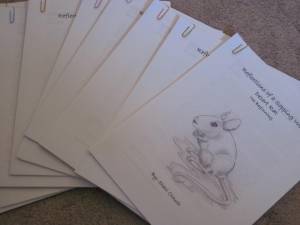 The reason it’s a dumb idea is that I have to go to Kinkos and make color copies of all the art. Then I’m also going to pay Kinkos to bind all the pages into actual books. When it’s all done I’m going to sell them for a $1. If someone wants to pay a little more I won’t say no.

A friend of mine pointed out that I might loose some money on this project. That is true, I probably will. BUT! It’s kept me busy and made me feel important for a couple weeks so I’d say it’s a few dollars well lost…

ANYway, that’s what I’ve been occupying myself with lately. But since I’ve been so immersed in that I don’t have a good blog post this week. I was going to do a top five list, but I couldn’t think of a good one. Except maybe top five times I’ve been wicked drunk, wait that’s a good one.

1. That time at Chopstix. If you know about this one, good for you. I don’t want to talk about it.

2. In Palm Springs, at The Ace Hotel drinking Gin & Tonics with my friend Dustin. I didn’t really have a taste for gin for a long time since it reminds me of licking a pine tree, but for some reason the ones Dustin kept bringing me tasted like very refreshing water. Which is not good if you’re going for moderation.

3. July 3rd, 2008 was a Thursday, it was also the day before the 4th of July (dur) and so some friends decided to have a party before the party. I drank so much I was hungover until about 4pm the next day. I missed all the festivities at Gasworks that year and could only nibble a banana until about 2pm.

4. At Bill’s Gamblin’ Hall in Las Vegas this year. I met up with my old boyfriend (yup the good one) from High School and we drank like we were sixteen again. Which was a poor choice since I am no longer sixteen but thirty. I still love Vegas, because it’s a big 24 hour party and hey! I like parties!

5. For a long time at SPU students were forbidden from drinking, even after you turned 21 and the law said you could. So about two days before graduation, the night before the Ivy Cutting Ceremony, Jordan and many of his friends, threw huge parties. I remember going to two parties I think. The next morning I was wrecked but had to get ready for the ceremony which started at 9:30am. I can’t recall what time we had to be there, but it was early. I showered, brushed my teeth at least twice then headed out to attempt to stand for over an hour in heels. Both my mom and aunt could smell the alcohol as it seeped from my pores. Very classy indeed.

So there you have it, the top five times I’ve been inebriated.

Once the books are finished I’ll let you all know, because I’m sure you all are just dying from the anticipation!

The Month Old in Vegas

Air travel has never been my favorite way to go. I admit I like the speed in which you arrive at your destination, but air travel normally stresses me out. Especially since all those extra safety precautions have been put into practice.

I don’t know where this stress comes from. It could come from the terrible experience I had flying with my family from Southern California to Central Oregon. It was Christmas Eve. Our first flight was delayed, so we “missed” our connecting flight, even though they hadn’t closed the doors or started the engines yet. What I think happened is our seats got given to stand by passengers. Instead of just telling us this the woman at the counter said we were too late and that we couldn’t get on the flight. After pleading and arguing with her for ten minutes they finally closed the doors and started the engine. We spent the night at the Portland Airport and caught a flight the next day.

Or it could be that I have to find a way to cram all the shampoo I’ll need for any given trip into a 3 oz. container but whatever.

All that to say flying stresses me out. So this weekend started out on the stressful side for me. I was going to be flying with my month old son in tow. Yes I was going to be the woman with the baby on the plane. Not only that, but I’ve been conditioned by my husband to not check bags. So this was our goal for this trip as well, even though we’d have a baby.

I didn’t realize how much stuff a baby uses on a daily basis until I was trying to fit everything into one bag and one “personal item.”  Luckily for this trip we’d be staying in a nice resort (thanks to my mom) so I didn’t have to worry about the whole 3 oz. container thing for my hair products. But Jack had to have a whole array of things. He also brought twice as many clothes as I did, along with two blankets and a Baby Bjorn.

My sister graciously came with me to help out with the little tyke and honestly the flight there was not too bad. He slept most of the time and only grumbled once or twice which was quickly fixed with a pacifier.

The next challenge came when we told our friend Hannah we would meet her for breakfast, which turned into brunch, which turned into lunch. It took us all that long to figure out what to do, get ready and go. Jack rode along and sweated in his Baby Bjorn as Elise and I walked the strip to meet Hannah.

A Baby Bjorn is a wonderful thing. I’d never used it until that day, but I adore it. It’s great to have your baby so close yet have your arms free.

As you may have guessed bringing a month old baby on a trip like this is not common, so we got lots of comments; most of which were along the lines of ‘what a cute baby!’ And ‘how old is he?’ There was one man who said something completly different.

Elise and I were waiting for the free shuttle that would take us to the strip from our hotel. He was standing in front of us with his family. He turned to his wife after eyeing Jack for a moment and said something like, ‘I wouldn’t bring him here. He’s way too young for Vegas.’ Like we couldn’t hear him as he stood directly in front of us about a foot away.

I didn’t hear him say that, but Elise said she wanted to turn to him and tell him he didn’t know what we were here for so maybe he should shut the hell up. We were there for a wedding by the way, not to drink and gamble and check out male strippers. Although I am planning on going back to do those things as soon as I can leave Jack for a few days.

And the last challenge getting Jack back to Seattle after his schedule had been royally screwed up, not to mention being a grumpy, tired baby. He was fine as we strolled through the Vegas airport, had breakfast and boarded, but for the rest of the flight he was fussy, and even let out a few screams as we made our descent into Seattle. Surprisingly though I just took the child in my arms, stuck a pacifier in his mouth and talked quietly to him in reassuring tones and I didn’t feel stressed at all. I just felt like a mom.